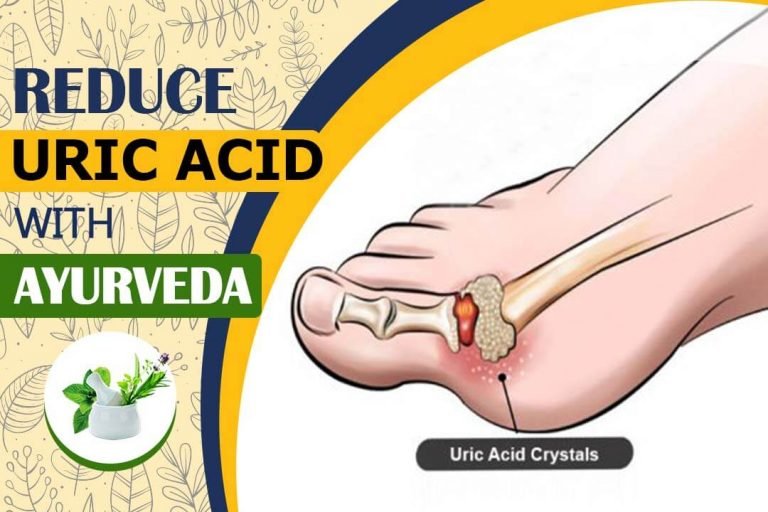 Uric acid is a chemical created when the body breaks down the substances called purines, found in a few foods and drinks. Most uric acid dissolves in blood and gets excreted by the kidneys in the form of urine.
However, high levels of uric acid cause hyperuricemia, a condition that can lead to painful inflammation of the bone joints. This inflammatory arthritis is commonly known as gout. In general, Ayurveda takes a holistic approach to health. Ayurvedic treatments can involve herbs as well as lifestyle changes, such as exercise, meditation, and diet. In allopathic medicine, which dominates Western health-related care, there are several different treatments for gout. These include Dietary changes, such as reducing dairy, meat, and alcohol intake or cutting those foods out altogether nonsteroidal anti-inflammatory drugs (NSAIDs), corticosteroids, and colchicine, all of which reduce pain and inflammation xanthine oxidase inhibitors, which reduce the level of uric acid produced in the body probenecid, which helps the kidneys remove acid from the blood.

The drugs usually prescribed for gout in Western medicine can have a range of side effects. For that reason, many people look to alternative medical systems such as Ayurveda for gout treatment. Doctors recommend diet and lifestyle changes to deal with gout, while Ayurveda believes that high levels of uric acid are a result of ‘Vata dosha.’ Ayurveda recommends avoiding high purine foods like cabbage, squash, bell pepper, brinjal, beans, beetroot, a certain type of fish to bring down the uric acid. According to Ayurveda, adding the following foods or supplements to your daily diet will bring down uric acid levels naturally.

Uric acid is created when the body breaks down purine nucleotides which are formed due to faulty protein metabolism. High concentrations of uric acid in blood serum can lead to a type of arthritis known as gout. The chemical is associated with other medical conditions like ammonium acid urate kidney stones. Now the big question is how to reduce uric acid naturally without using any chemicals?

A high level of uric acid is a recurrent condition that can be controlled and cured by using natural remedies without the need for expensive mainstream chemical-based drugs. Raised uric acid leads to a painful joints condition commonly known as gout. The toe joint is especially affected and later all other joints are involved.
There are many natural remedies to reduce uric acid. Ayurvedic remedies are one of them. Ayurveda is a traditional healthcare system practiced in India and recognized by WHO. Ayurveda utilizes various herbs and minerals to care for various diseases including methods to reduce uric acid naturally without causing any side effects.

Gout is a painful metabolic disease caused by high levels of uric acid in the body. It is a kind of arthritis, a condition that affects the joints. It is often characterized by sudden and severe attacks of burning pain, redness, and tenderness in joints. Earlier gout was a disease of old age. But not anymore! Today, gout is prevalent in adults as young as the 30s. It usually attacks the big toe. However, it can also affect other joints such as the ankle, heel. Knee, wrist elbow, finger, and spine.

This persistent pain if left untreated can harm your joints, tendons, and tissues. The drugs prescribed for gout in Western medicine come with a range of side effects.
This is the reason why people turn to Ayurveda for holistic treatment of Gout. Ayurveda uses medicinal herbs along with lifestyle and dietary changes to treat and manage Gout. 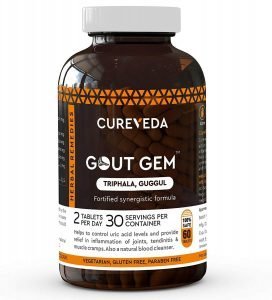 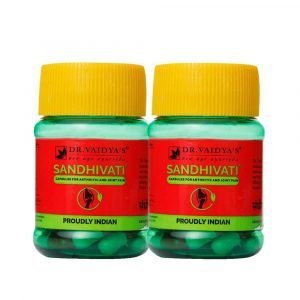 Ayurvedic Medicine for Joint 30 Capsules (Pack of 2). An Ayurvedic formula for joint and muscle pain
Reduces inflammation and stiffness | Increases the lubrication of joints. Improves joint mobility and slows down joint degeneration. Safe for long-term use. Manufactured in WHO-GMP, Ministry of AYUSH approved plant. 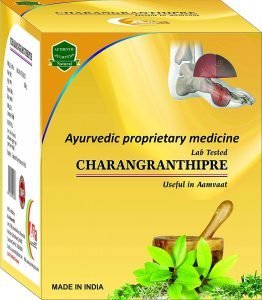 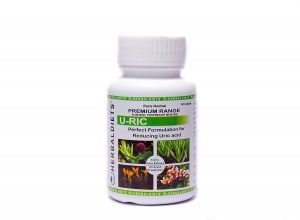 Premium Range Ayurvedic Proprietary Medicine U-RIC for Uric Acid. URIC Acid is a normal body waste form when a chemical called purines breakdown which is found in many foods. High Uric acid level occurs when kidney does not eliminate Uric acid efficiently. A high level of Uric acid in the blood can lead to a body pains type called “GOUT “ or “ARTHRITIS”. 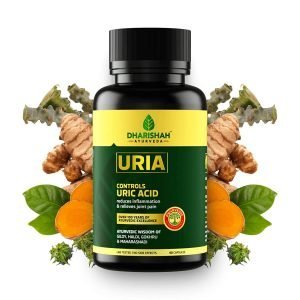